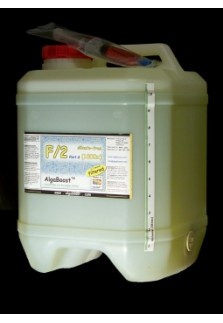 Formulation: Our formulation produces an f/2 NH4 medium that is modified from that used by the CSIRO Microalgae Culture Laboratories (AUSTRALIA) & closely based on the formulation of Guillard & Ryther (1962) and Guillard (1975), by the use of NH4 in place of NaNO3 (1:1 molar subsitution) and the exclusion of silicate.

Can I use it with diatoms ?: You can use this product for culturing diatoms if first you add appropriate levels of metasilicate to the seawater used to make your media. For this purpose, sodium metasilicate pentahydrate is commonly added to seawater at a level of 12.5 - 22.7mg / litre, although the amount required may vary according to the species of microalgae and general culture conditions used.

Product Conditioning: contents of the 10 litre drum and the 10 ml syringe, are 0.2 micron filtered.